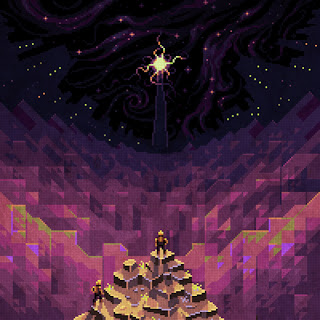 Over four years ago, Disasterpeace began writing a song called "Jump Error"--a song which, in due time, would be the first he would compose for a twelve-track, Nintendo NES and demoscene-style album that would mark a turning point in his continually evolving musical style.

Known in real life as Rich Vreeland, Disasterpeace has aimed for an uncommon style of chip music composition since he began writing his 8-bit tunes around 2005. "Level", his previous release, was a melodic and even symphonic kind of effort, that combined emulated tones with interesting canned drum samples as percussion, such as you'd hear coming from the Nintendo Entertainment System's WAV channel.

Rich's new album "Rise of the Obsidian Interstellar" continues that trend, but for this record, Disasterpeace has pursued a style more reminiscent of old demoscene music, with recognizable square and saw waves somewhat similar to the pleasant tunes of Radix and Cerror. The effort is a solid one, despite a couple mediocre melodies or slightly uncomfortable changes of pace from time to time.

"Prologue" quickly introduces us to Disasterpeace's latest musical journey, with an ethereal, staccato-based melody and slow drum beat, before launching into "Jump Error", a happy and catchy tune with a Radix-like feel and head-bobbing bassline. "Club Wolf", track number three, isn't the best of the record, with an occasionally dissonant melody; however, the intro is fun regardless.

"The New Formation", my personal favorite, is where things start to get really interesting. First comes a pleasant, recurring theme that sounds reminiscent of Martin Galway's filtered melodies of old, and then the tune launches into a nicely dancable bassline with a cool beat and enough style for its lengthy running time. "Beta's Brilliancy" begins as a soft, harmonic track that eventually grows louder and louder before--very cleverly--leading directly into "Ensis", a rather hard-driving track that, while opening well enough, soon gives way to a less-than-perfect melody and six-minute duration. Nevertheless, the track does recover for the final two minutes before giving way to "Day of Reflection": a soft, soothing melody that successfully provides a respite from the previous upbeat material.

In a few instances, Disasterpeace does resort to blending dissonant notes with his sometimes understated melodies--for a certain period--in both the ninth and tenth tracks. Still, he also treats his listeners to moments of melodic reward and pleasant themes that help the album remain a solid effort nevertheless. The penultimate track "Submerciful" has a nicely mellow feel to it, and "Constellations" ends the record with a mysterious lo-fi rendition of a theme that I'm pretty sure I've heard somewhere before.

Overall, "Rise of the Obsidian Interstellar" is a sufficiently rewarding, but not entirely flawless, chiptune experience, that thankfully manages to warrant more than a few listens with its solid selection of unique tunes. Several melodic hiccups and slightly awkward changes of pace do mar the experience somewhat, but Rich's remarkably high production values and demoscene-style musical cues ultimately win out in the end. If you're a Disasterpeace fan, you'll most likely be very pleased with this release; if you aren't, I would suggest checking out full preview tracks on the BandCamp page before deciding whether or not to make a purchase.