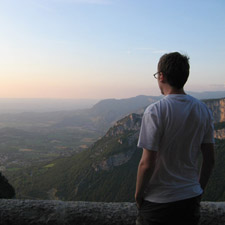 He's arguably the biggest pioneer of module chip music, and if you haven't heard of him, you should reconsider your status as a chiptune fan. The artist in question is Radix, who spent several happy years of the 1990s composing legendary chiptunes on the Commodore Amiga. His carefree, intensely happy melodies would eventually earn him a fine reputation as one of the best chiptune composers of our time.
In real life, he's known as Jakob Svanholm, and he graciously took the time to answer several questions I had about chiptune projects from the past and future.

1. In the 1990s, you began writing module chip music... what introduced you
to the idea, and what led you there?

"Not entirely sure how I got started but I remember getting my hands on some chiptunes, and sitting down to study the techniques. One of the first chiptunes I listened to was Lost Scrotum by Paso. What a track :) I think I was immediately drawn to the simplicity of chip music, and to me they served as an outlet for all those naive melodies and pop elements I had growing inside my head, all this in a format which allowed me to get away with it :)

It's funny because I never considered myself a chiptune musician. I certainly composed my share of chiptunes back in the day, but it was mostly for giggles and not my primary objective in the demoscene. Looking back, perhaps it IS the chiptunes that made the biggest footprint, I don't know :)"

2. How did you get involved with the demoscene, and what was it like to be a
part of?

"I got involved in the demoscene during the peak of the BBS era in Sweden. Some demogroups around Stockholm were looking for members and I was asked to join. If I'd try to describe my impression of the demoscene, I'd say it was very friendly, it was exciting and underground, and finally I'd say it was very competitive, but in a positive way. I listened and studied the works of other musicians to no end, trying to improve."

3. Your compositional style in your chiptunes was quite unique for its time,
and is now heavily emulated by many other artists such as Malmen and Cerror.
What inspired you to create such happy, emotional melodies in this
particular way?

"In all fairness, everything is about emulating the work of others. You study, copy, reproduce. You mix up some ideas here and there and the result is something new. Speaking of those two fine musicians you mention, I think they're brilliant and they surpass me in the art of chip music in so many ways. The reason I made happy chiptunes, I don't know but I think that came naturally for me. Some chiptunes that inspired me greatly were happy, playful, charming and fun, and I believed there should be more tunes like that :) If I were to mention some maestros that taught me the ways of the chip, it would have to be Heatbeat, Monty, Supernao, Nuke, 4-mat, wotw, Reflex. Probably many more :)"

4. "Rainy Summerdays" and "Yoghurt Factory" are two of my favorite tracks of
yours. What were your goals while composing these tunes?

"Glad you like them :) Rainy Summerdays was composed on a rainy day in '95 on Amiga. Good times! '93-95 was the highlight of the demoscene for me. I think this particular tune was heavily inspired by a chiptune called "Spring Air" by Sire (one of the best chiptunes ever, in my opinion) used in the classic Lego 40k intro released at The Party 1993. Sire, if you read this, I tip my hat to you :)

Yoghurt Factory, well let's just say that the yoghurt factory in Alsace countryside actually exists, and they have all these clever machines doing all sorts of things :) I wanted to make a chiptune that was simple in melody but also had some interesting mechanical-moving-parts feeling going on at the same time."

5. Would you ever consider returning to chip tracking with a new album?

"Who knows, maybe one day :) When I listen to modern chiptunes, like the works of xyce, malmen, joule, zabutom, 4-mat, I can certainly feel this urge to get back to it. Though, right now I'm trying to focus on my Mosaik project as much as possible, and even that is down to a very casual level. That said, some collaboration work is not out of the question :)"

6. What do you want your legacy in the chip music scene to be?

"Someone once said that my music evokes feelings of limitless potential. Such a great comment, and if I can make one person feel that, then I'm already happy :)"
Posted by Feryl at 9:47 AM 9 comments: