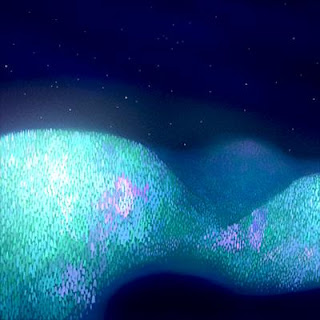 Brother Android's "October November December" is, in the artist's own words, "An album about the winter time," but the music itself is so much more than that. As the title suggests, it's themed around the last three months of the year; and the artist does a masterful job of converting a cold winter's evening into beautifully soft chip music.
The first track, "The Winddown", is a nice and soft intro with a sine-wave melody that introduces the album quickly and effectively. "We Can See Our Breath", track number two, is a flawlessly executed display of percussive and melodic elements coming together to create something wonderful. After the well-structured into, the song launches into a sweeping sine-melody that becomes more sophisticated throughout the rest of its five-minute running time.
"A Walk in the Cold" continues the overall coherence of the album by means of a multi-channeled ethereal theme which thoughtfully continues for the majority of the song. There are a few filler tracks as well, all little gems in themselves, such as "Field Smoke", which happens to be one of the best. "The Stars Come Out" is one of the most beautiful tunes out of the ten which comprise the release, and includes some beautiful melodic and bass work that fits the title perfectly. It's almost as if Brother Android went outside, looked at the stars, came back in and wrote the song.
Track seven, "It Rains", is the album's lengthiest track, clocking in at over nine and a half minutes. I've never heard the simple concept of rain portrayed better in electronic music, but the second half of the track is not quite as mystically satisfying as the first. A beautifully mellow intro leads the way into panning percussion and gradual complexity, which results a musical representation of an intense thunderstorm by the end.
"A Bit of Sun" begins with an increasingly intense percussion sequence before giving way to another ethereal, soft melody, symbolizing the first sign of sun after a long winter. The closing track is "First Freeze", a mellow chill-out style effort involving a somewhat harsh and icy melodic sound. It provides a satisfyingly competent close to an excellent album with a long, fading white noise sample that softly slides down in pitch before giving way to complete silence.
Brother Android proves his admirable talent and competence with "October November December", an adequately-titled, soft chiptune experience that delves into a theme not often covered by other chip musicians. The symbolism of the winter theme comes through very effectively in the music, with several standout tracks and enough charm to earn a high level of respect for the cleverness of its artist.

The man responsible for this masterful release is known in real life as Harrison Lemke. To him, chip music and electronic fans everywhere should be in awe of these tracks. Mr. Lemke, you have successfully crafted one of the very finest chiptune albums of all time.
SCORE: 9.0 out of 10 - "Outstanding"
[Brother Android's "October November December" can be downloaded for free here: http://brotherandroid.110mb.com/octnovdec.html]
Posted by Feryl at 8:50 PM