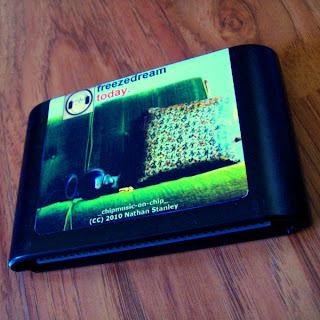 How many chip music albums do you know of that have been released on an original cartridge? One of the very select few in existence happens to be Freezedream's "Today"--a mellow, ambient exploration of the limited 16-bit sound chip of the SEGA Genesis.
Using absolutely nothing outside of the Genesis' musical features, Freezedream has created an interesting and highly unique chiptune experience through nine brief tracks of IDM-style music. Though it may not be particularly impressive from a compositional standpoint, the release is nevertheless a rewarding and interesting one to listen to, taking into account Freezedream's interesting take on what a chip music album can be.

"Winter in July" opens up the album on a soothing and ambient note, while "Realtime Love" introduces listeners to more conventional chip music with distinct bass, melodic, and percussive layers rendered through the Mega Drive's scant six channels. "See You Next Tuesday" and "Cardioid" don't do the album any huge favors, but the atmospheric vibes of "Luer" and "Iridescence" succeed pretty well in creating a downbeat style of music that you wouldn't expect from the unusual hardware used.

"Today" is a short record, consisting of nine two-minute tracks; but that actually turns out to be for the best in the end. Freezedream's foray into the rarely-used sound chip of the SEGA Genesis won't revolutionize the way chiptunes are composed, but it does do a decent job of setting a dreamy and atmospheric tone that is too often missed in the modern chiptune scene.